In some ways the economy in Istrolid is simple, but it leads to many complex decisions.

At the start of the game

Usually there are some capture points belonging to the enemy on your side of the map. Send some scouts or fighters to capture them ASAP. Not only will you get more income but you will get an initial $100–$300 that can help you push out some extra units. Early scouts and fighters can also be used to deny the enemy from capturing your points as well. 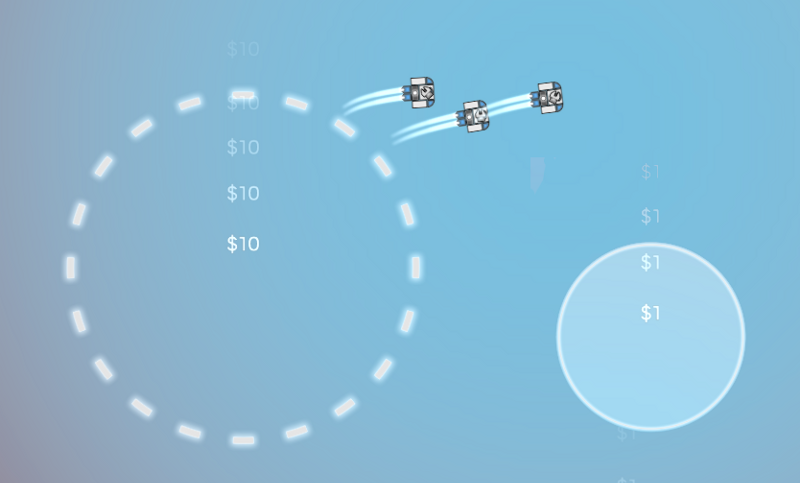 Since if one team holds all 8 capture points, they win immediately, each player will always have their base income plus one capture point. Thus the largest income disparity possible is +$17 vs +$11 per player. This means that the side with 7 capture points has 55% more income than the opposing side that they can spend on more and better units. However, even if they control the whole map the winning player cannot afford to suicide units without killing any of the opposing teams. They must still trade at around 2/3rds efficiency to stay ahead.

Holding most of the map means you have $300 in extra army over the enemy. However, this also presents them with an opportunity to take the map back for a $600 swing in their favor. This offers a comeback mechanism for a losing player, if they can take out the enemy fleet and secure the map for themselves, they gain the momentum from their opponent.

While it is worthwhile to aggressively capture points, sacrificing to do so is rarely worth it. Don’t consider the $100 you get from capturing a point as pure profit but rather as a loan from the enemy that they get back once they recapture the point. If you sacrifice a $50 scout to capture a point for 20 seconds until the enemy recaptures it, this gains you +$20 and loses the enemy -$20, representing a net swing of $40, which does not compensate for the cost of the scout and loses you $10 total. This gives you 20 seconds of having one extra $100 fighter on the field though, so in this situation you must use that advantage to take the point more securely.

The $100 capture bonus also ensures that tense games with fighters constantly trading points raises the income for both players. If a capture point changes owner every 10 seconds it effectively grants both player +5 income each second. Just by constantly capturing 1 point every 20 seconds even if you lose it immediately, it changes the income from +17 vs +11 to +21.5 vs +16.5 which is only a 30% larger income for the player controlling the most points. 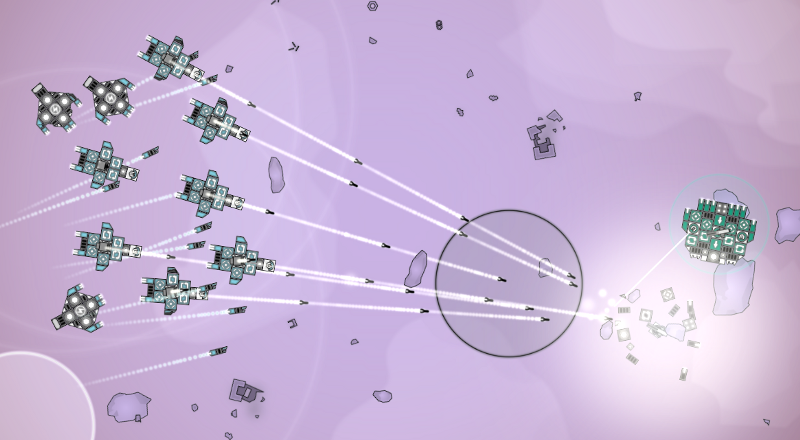 If the enemy has beaten you down to $500 of units and still has $1000 of units on the field, their force is 2x as expensive and 4x more powerful than yours. If you can make some scouts or light fighters and capture some points quickly you’ll get some money and the force disparity will decrease drastically. Even if income is completely even, force disparity decreases over time if there are no losses, as a force of $1500 vs $2000 is only 1.33x as expensive and 1.77x as strong. Force disparity tends towards income disparity if no side loses any units. If the enemy is just camping his last capture point and you lost a major part of your fleet trying to kill his units, your force will still grow to be 55% larger due to income disparity over time unless he starts to move out and capture points.

If you lose the main fight and the enemy has a much bigger force than you, you should try to avoid fights and keep capturing points until the force disparity decreases. Force the enemy to split up so that you can gain local superiority and make efficient trades. If you have a bigger force try to hold the capture points to force the enemy to fight your much larger force, without letting them capture points back and forth so that the income disparity remains high.

There are exceptions to this of course. If the enemies current force is countered by what you have, but you know that if they’re able to save up they can purchase a ship that counters you, it might be better to kill his units with what you have. An example of this might be a heavily damaged bombardment ship, an out of power battery-based ship or an unarmed carrier fleet which would only take a few fighters to kill, but if he manages to retreat he can build ships to defend them.

If you are building up a deathball of fast, long ranged and shielded kiter cruisers for example, those cruisers are unlikely to have a big impact on the game until they can achieve critical mass. This depends on how expensive the enemy targets are and how easy they go down. If the enemy spams cheap units with lots of armor, he might just push you away from all the capture points on the map before you can achieve critical mass with your cruisers. If your $1000 ship does 10 damage per second against a slow armored ship that costs $250 and has 500 HP, your cruiser effectively costs the enemy -$5 per second when it is in range of the enemy and firing. It would take 3 of those $1000 ships just to counter the starting income of +$14 and you are likely to get pushed away from some of your capture points, boosting the production of the slow armored ships even more. If you are not losing ships over time though, eventually you will be doing more damage than he has income and will be able to overwhelm him. However, it would take 2 of your cruisers 3 minutes and 20 seconds just to kill the initial 8 armored ships the enemy can make. If the map is small and the capture points are clustered, this favors the armored ships even more as the cruisers can’t go around the armored ships to kill off lone ships and capture the points as easily. This is even more exaggerated if your cruisers composition needs to build point defense against missiles and anti-fighter weapons to prevent it being rushed down, as this subtracts from your bombardment power and can make a ‘full’ composition cost much more than your starting resources.

In team games all of your teammates get the additional +1 from the capture point so sacrificing a $50 scout to capture a point and hold it for 20 seconds gains your team a net profit of $10 and a swing of $120, for a $70 advantage to your team. In a 3v3 that sacrifice is worth it, but points are potentially harder to hold. In 2v2 this same trade represents a $30 advantage for your team.

If you have a bigger force than the enemy, you should prevent the enemy from capturing any points and/or try to engage the enemy before they can rebuild their fleet.

If you have a weaker force, avoid fights that you cannot win and try to constantly capture and recapture points as quickly as you can to rebuild your fleet as fast as possible.

Sacrificing units to capture points should be considered with care but it is easier to make cost doing that in team games.